The Things I Write About… In General

The start-up generation has infused the world with the can do attitude. Have an idea? Well… Go ahead and do it. What are you waiting for?

The glamorisation of app creation has fuelled this even further. The process has now been edited to, Have an idea you think is freaking awesome, make the app, upload it to the app store, sit back and wait on the InsTwiSnapBook success phenomenon to pursue you, complete with the glory of waiting on that acquisition proposal eMail.

An eMail that you will turn down because no one can put a price on your dream, but still the fact that someone was even willing to offer is enough to fuel your ambition into the birth of another idea.

For some this actually works, we can even speculate on why/how it works; some will claim that it is the network effect (literally walking the thin line between technical know-who and just plain professional contacts) that boosted their success; and others it will just be the timing factor, their idea was born at a time when people just needed it.

For others, that sort of idealism will leave them with the bitter taste of defeat. The idea was great, a business was started out of it, a product in the form of an app was created but the intended audience is simply not interested one bit in what you are attempting to sell to them. In fact, they would rather you kept quiet and just moved on altogether.

This is the harsh reality when you consider that a lot of startups are designed around a single app.

When you have ZERO customer engagement, what do you honestly think will happen? When you have no idea what the agile movement is about (yes, I am a biased member of team agile) and simply look at us techies as tools that you can use in your current get-rich scheme. Okay, perhaps that was a little harsh, but quite honestly it comes across as exactly that. When Human-Centered Design processes to you are akin to the red tape bureaucracy that is characteristic of African government.

Tell me, when you are sick, do you march into the doctor’s office with a plan of how to get better? Are you shaking your head? You think this is a far-fetched analogy?

The vast majority will look for and even court successful people in business to the extent that they are willing to ‘invest’ in getting their opinion. But let your resident developer attempt to explain to you why you need to iteratively involve your target audience in the development process – suddenly, there is no budget for that.

You see that is what the Agile Movement is about (Yes, I am avoiding the word methodology). Scrum is one of the more common ways that agility is implemented within teams. It allows for incremental product development across cross-functional teams. The development process is usually broken up into sprints which are 1-2 weeks. After the 1 or 2 weeks, the team will present a ‘shippable product increment‘. There are three main roles in Scrum: Scrum Development team: As said earlier, this is cross functional: the test, business analyst, domain expert (For example, if your product has something to do with the medical field: paediatrics – you need to find a paed who is willing to take part in the project. ); the Scrum Master and the Product Owner.

Scrum is only one way of implementing of the using agility in your process. Other methods include using Feature-Driven Development, Dynamic Systems Development, Lean Development, Extreme Programming, etc. There is a whole menu to chose from, together with your team, figure out what works for you.

The assumption is of course that you have already gone to a sample of your intended audience with a prototype of your product and tested it on them. Prototype includes the ever inexpensive paper prototype as well. And yes, this is before any form of software development has even happened.

Watch how your user interacts with your prototype, note the questions that they are asking, where do they get stuck, what is easy for the them. Understand what feature needs to be taken out. Do they look excited about it? Do they even think it solves the problem they have?

We are often guilty of giving our users less credit than they deserve.

My point (incase it got lost in this mini-rant of a post), is there is a lot more that goes into creating a successful product, and not just the business/profitability of it but in the actual technical development of it.

How much are you willing to invest? 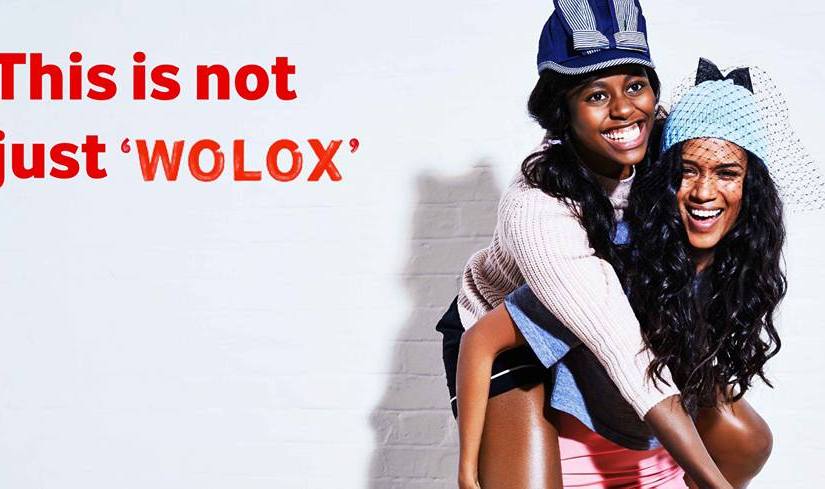 I’m starting off this month’s UGBlogWeek by finishing off the Vodafone Uganda series. Part one of this series can be found here.

Two:  Shifting audience focus to target universities as well as SMEs
Three: Moving away from traditional 2G voice and headed toward VoLTE (Voice over LTE).

VoLTE stands for voice over Long Term Evolution. Utilising IMS technology, it is a digital packet voice service that is delivered over IP via an LTE access network.

Why you will love VoLTE: Ensures that video services are fully interoperable across the operator community, just as voice services are, as demand for video calls grows; Delivers an unusually clear calling experience; Meets the rising demand for richer, more reliable services
Source: GSMA

Vodafone plan to enhance LTE network by deploying wifi in malls, universities, creating a converged network to mirror seamless connectivity for users from LTE to Wifi. These Wifi networks will not require a separate data bundle but will work off the bundle already purchased by the user.

One app targeting SMEs and University students is Chat+. Chat+ is a VoIP (Voice over IP) Application that boasts of HD call quality and messaging features that are found in today’s popular messaging apps.

Voice over Internet Protocol (VoIP), is a technology that allows you to make voice calls using a broadband Internet connection instead of a regular (or analog) phone line. Some VoIP services may only allow you to call other people using the same service, but others may allow you to call anyone who has a telephone number – including local, long distance, mobile, and international numbers.
Source: FCC

In addition to free app-to-app calls, Chat+ allows it’s users to call out of the application, that is to say to landlines or numbers that are not registered to use the app – users will get charged the normal call rate (SIM call rate).

One key note though, is File transfer and Video calling are not free due to their large data requirement. The rest of the features are offered Free, where free means you have a valid data bundle (i.e. more than 1MB of data, yeah… that’s right! No data charge unless you are using the two previously mentioned features)

The app also works on Windows, Android, IOS (imagine that!!) as well as a desktop version that is independent of the mobile app (side eye, WhatsApp and your desktop integration).

It has been dubbed the total communication package, for people looking to start a business, for students studying in groups and for people who want to engage with tomorrow’s communication today.

More info on the app page 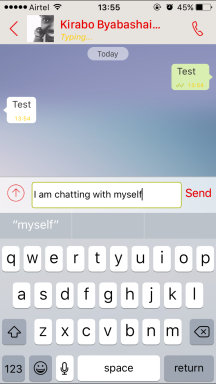 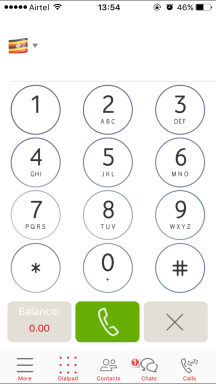 I will confess that when I heard about the app, I immediately wanted to put vodafone to task over the fact that earlier this year they talked about putting a stop to their unlimited packages but alas! The fact that there is no data charge on all but two features, is a huge plus for them. Since the intended audience are SMEs & students, this is probably something that will be well appreciated.

<cue subtle plea> Just think of the potential of Chat+ offered together with the unlimited package! Especially for SMEs that thrive on face-to-face video communication.
subtle plea>

What would make this the ultimate communication tool for me? The integration of Stickers and GIFs. Yes! There is a certain app that allows the use of both these things and my friends on that platform know my obsession.

Also, the scale of some portions of the app seem a bit off. Blame the is the newly awoken UI junkie in me for pointing this out. The keyboard and keypad seem a little larger than they should be making the user experience just a tinsy winsy bit jenky.

Cool Fun Note
Have you ever noticed the red open apostrophe in a chat bubble? It immediately brings to mind the beginning of a conversation. Right?

Why then wouldn’t you want to talk about tomorrow, today?

This is part two in a two part series about the things that intrigued me about the VodafoneUganda announcement. Have you downloaded Chat+? What do you think about it? Did it still work on 1MB?

Last week, Vodafone Uganda made an interesting announcement that might have gotten lost due to the connectivity challenges that they have had this week (blame Monday’s thunderstorm).

Three things in particular intrigued me the most:
One: Their pursuit to offer the best customer experience
Two:  Shifting audience focus to target universities as well as SMEs
Three: Moving away from traditional 2G voice and headed toward VoLTE (Voice over LTE).

Regarding their pursuit to offer the best customer experience; anyone who has used the self help portal, dubbed MyVodafone, will laugh at this goal. In most cases, functionality will trump the beauty of a user interface, however in this case, both were not appealing with many of us complaining how hard it was to use.

Alas! They finally heard our cry – Not only did the interface get an upgrade; we got an app too (and yes, Web, Android and IOS, imagine that).

MyVodafone now looks so much better, sleek, clean and almost minimal design. Both the Web App and IOS version have the same look and feel, giving the user a similar experience not matter what interface is used.

Payment Interface on the mobile interface

Payment Interface on the web interface

The interface allows you to do a whole host of things like track your usage (unless you are on unlimited – more on this one later), be someone else’s lifeline by gifting them data, purchase data using credit card or mobile money, details & location of their stores, usage history, payment history as well as an add-on feature that will give you dibs on special offers tailored to you. 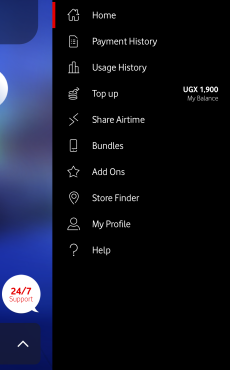 Payment Interface on the mobile interface Buy a bundle from the app

Speaking of tailoring, the mobile app’s home screen will also show you available data bundles based on your usage history. However, this feature will only work if you are on a plan that is not unlimited.

As with any system upgrade come the dreaded bugs and customer groans that are embedded with the theme, ‘but the old system used to do it’. These normally get fixed in minor releases, if caught early and since Vodafone is striving to offer the best customer experience…

Bug Two: Expiry date is a bit off and has likely been set to the day that the system went live.
Bug Three: The user login for some reason will not allow autofill, forcing the user to manually enter details.

And those are the only three that I could spot. All in all, the upgrade of MyVodafone is a step in ensuring a seamless customer experience, throwing the power back to us (see what I did there) and allowing us to access services at our convenience.

In other news, the app knows my name… Yes, I am inherently a narcissist.

This is part one in a two part series about the things that intrigued me about the VodafoneUganda announcement. Have you used the new interface? What do you think about it?

{{Update}}
Looks like unlimited users can now track their usage… Whoop Whoop!! Round of applause for VodafoneUganda and the engineering team!
Bug One – Decimated